Takeru Gouda is a character in Tsurezure Children. He is in class 2-4 and the captain of the Volleyball Club who is currently dating Ayaka Kamine.

Takeru is a tall boy with dark red-brown hair and large orange eyes with very small pupils and he is said to have a really nice body.

When he was in middle school, Takeru used to have a shaved head.

Takeru is always a very stoic guy who is a little shy that he rarely shows any facial expressions, but he does get embarrassed whenever Ayaka Kamine tries to get closer to him. He often misunderstands what Ayaka wants, but always tries to make her happy. In the beginning of the series he says that he doesn't know much about romance and such but its shown that later on he is learning which is when he faked a leg injury so that Takano could be with Takurou Sugawara for the leg race.

Akimasa is in the Volleyball Club with Takeru. He goes to Akimasa when Takeru was worried when he became the captain of the Vollyball Club, thinking he was down and off due to him becoming the captain.

Takeru and Ayaka kiss during their school trip 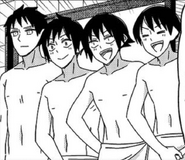 Takeru at the bath during a school trip 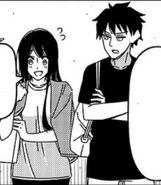 Retrieved from "https://tsurezure-children.fandom.com/wiki/Takeru_Gouda?oldid=3264"
Community content is available under CC-BY-SA unless otherwise noted.